Personal Style
Colour Analysis Myths: All People Of Colour Are One Of The Dark Seasons

I am starting a new series on the blog, in which I am hoping to dispel some common myths about colour analysis. First up, the persistent misconception that all people of colour are either a Dark Autumn or a Dark Winter. One of the two. They can't be any of the other ten seasons because they are dark-skinned and have dark eyes and dark hair. This is a very common misconception, which leads to a lot of people falsely identifying themselves as a dark season. And it's not surprising that this is happening. People of colour often get overlooked in colour analysis or pushed into the dark section because they have dark eyes and dark hair. But that's a false conception of the dark characteristic.

Before we dive into colour analysis theory, let's first find out how this misconception came about.

Where Did This Misconception Come From?

However, there was one thing that hasn't change since then. Colour analysis models are still largely only applied to white people. There is little to none information on people of other ethnicities. Some attempts have been made (such as by Donna Fujii and Darlene Mathis) to analyse and classify other ethnicities, but this sadly hasn't gained much popularity - though if you are interested, these two ladies are great resources.

As a result, darker ethnicities immediately identify with the two dark seasons since they the Caucasian examples representing the dark seasons most closely resemble their appearance. And how could they identify with a white, blonde Spring? It looks nothing like them. Yet they may be a Spring but dress in the entirely wrong colour palette.

Now let's see this in action: What season is Beyoncé? Does she look more like Mischa Barton on the left, or does she more closely resemble Julia Roberts?

If you've fallen prey to the dark syndrome, you might be surprised to hear that Beyoncé and Mischa share the same season. Both are Soft Autumns. The true Dark Autumn here is Julia Roberts. So why is this?

Well, if we just throw all ethnicities together in a pot, then we will inadvertently type all dark-skinned people as dark. Because by comparison, people of colour are dark next to white people. But dark-skinned does not automatically equal dark. The distinction between the seasons is a different one.

How Do We Know Someone Is A Dark Season?

Simple, we look at contrast. In my opinion, this is the most important criterium in colour analysis. Look at Mischa Barton. There is almost no contrast at all between her features.

The same is true is for Beyoncé. Her skin, eyes, and her hair (even though it's coloured) are all very similar in colour.

We can't say the same thing about Julia Roberts, though. There is clear distinction between her dark brown eyes and hair compared to her very light skin. She has a very high contrast.

Black and white versions of the images demonstrate this even better:

If we were to put Beyoncé into a dark colour palette, she would instantly be overwhelmed. And we can see this happening time and again because Beyoncé often appears in dark colours.

Take a look at the following examples: the black outfit and the dark red lip pale her to the extreme. Notice how the dark red lip is so much darker than her eyes and hair and immediately demands all the attention.

Now it's not an easy feat to find images of Beyoncé wearing her actual seasonal colours, but in the image on the right you can see how the softer, earthier colours look much more harmonious against her skin and blend in much more nicely with her hair and eyes. The conclusion: Beyoncé is not a dark season.

But what does an actual dark season look like? Here is Beyoncé's bandmate Kelly Rowland. She is a Dark Winter. Why? Look at the high contrast between her dark hair and eyes against her lighter skin. Her features are truly dark.

Consequently, she looks great in black. Whereas a softer colour is far too light on her and just looks out of place.

Now of course, contrast is not everything. There are other factors that need to be taken into account - such as your brightness. But it's a starting point when you are analysing your own appearance. If you don't have a lot of contrast between your features, you are not one of the dark seasons.

What Seasons Are These Ladies?

In case you're wondering, out of the five ladies on the top, only one is a dark season. Sandra Bullock is a Dark Winter, Ni Ni is a Bright Spring, Deepika Padukone is a True Spring, Rihanna is a Soft Summer, and Lupita Nyong'o is a Bright Winter. 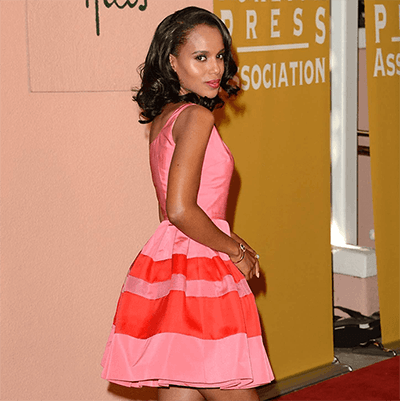 Colour Analysis Case Study #1: Kerry Washington

Subscribe to the concept wardrobe
Thank you! Your submission has been received!
Oops! Something went wrong while submitting the form.